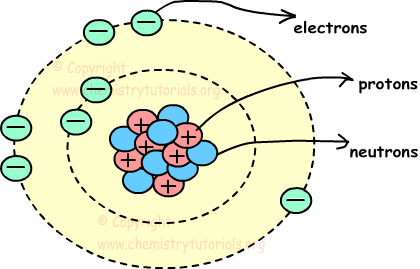 Protons: Protons are positively charged particles of atoms. They are located in nucleus, and have mass. We show protons with letter “p”.

Electrons: Electrons are negatively charged moving particles of atoms. They are located around the nucleus on orbits, and have no mass. We show electrons with letter “e”.

Neutrons: Neutrons are charge-less particles of atoms. They are located in nucleus, and have mass. We show neutrons with letter “n”.

Example: Which ones of the following statements are true for 1224X ands 1124Y atoms.