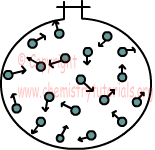 All properties given above are belong to ideal gas. However, there is no such a gas obeying these rules. Gas should have low pressure and molar mass and high volume and temperature to become ideal gas. If gases are compressed ( increasing pressure, decreasing temperature), they are condensed.

Example: Which one of the following statements related to gases is false.

I. They can produce homogeneous mixtures.

II. Density of same matter in gas phase is smaller than density of liquid phase.

III. They are fluid.

IV. They apply same pressure at every point of container.

V. They can be condensed under low pressure and high temperature.

All of the statements are true except from V. It must be;

Gases are condensed under high pressure and low temperature.

Example: Which ones of the following statements are true related to given gases under same conditions.

I. Pressures of the gases result from collisions of atoms/molecules to each other.

II. Both of the gases have equal average kinetic energy.

Gas pressure results from collision of particles to the surface of container. Thus; I is false.

II and III are true.