1. First ionization energies vs. atomic mass graph of X, Y, Z, T and R is given below. 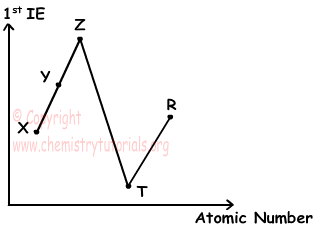 If Z is in 3rd period, which one of the following statements is false?

III. Z and T are in same period

Since change in the first ionization energy of Z and T are too high, Z is noble gas and T is in I A group. Thus, Z is noble gas in 3rd period and it has following electron configuration;

Atomic number of Z is 18

II. Y has atomic number 17 and has following electron configuration;

III. Z is in 3rd period but T is in fourth period. III is false.

IV. Electron configuration of R is given below;

Since all orbitals are filed, R shows spherical symmetry property. IV is true.

2. Which one of the following statements is false for elements given in the periodic table?

I. Electron affinity of Y is larger than others

IV. Ionic property of ZY compound is larger than others

II. Since X is in I A group, it is metal and T is in VA and nonmetal. So, X and T can form compound by electron transfer, not by electron sharing. II is false.

III. Atomic radii increases as we move from right to left and top to bottom in periodic table. So, Z has largest atomic radii, III is true.

I. X and Z are in same group elements

We first write electron configuration of elements to find group and period numbers.

I. Number of electrons in last shell orbitals give group number;

Y and Z are in VII A group. I is true

III. Since X is in II A group it is metal and Y is in VII A group and it is nonmetal. Property of compound is ionic. III is true.

4. Which ones of the following statements are always true related to periodic table?

I. s and d block elements are all metal

III. There are nonmetals before noble gases.

IV. There are halogens before noble gases

H is in I A group but it is not metal. I is false.

When we examine periodic table we see that there are always nonmetals before noble gases. III is true.

H comes before He and it is not halogen. Thus, IV is false.

5. Electron configuration of X+2 last with 2p6 . Which one of the following elements have similar chemical properties with X element?

Z and T are in same group with X, thus they have similar chemical properties.