1. Which ones of the followings are true according to kinetic theory of gases;

I. Speed of gas particles are equal under same temperature.

II. Repulsion or attraction forces between gas molecules are too small that they can be neglected

II. Since there are large amount of spaces between gas particles, repulsion or attraction force between them is too small and they can be neglected.II is true.

2. System given below is filled with X liquid under 0 0C and 70 cm Hg atmospheric pressure. If density of X is smaller than Hg and tube has cross section area 1 cm2, find which one of the following statements are true for this system. 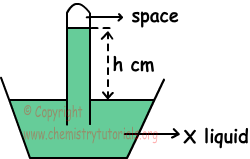 II. If we use tube having cross section area 2 cm2, h value changes.

III. If we put this system in to sea level, h increases.

I. Atmospheric pressure is;

H and density of liquid in tube is inversely proportional to each other. So;

II. Cross section are of tube does not affect h value. II is false.

3. Which one of the following conditions make gas behave like ideal gas. 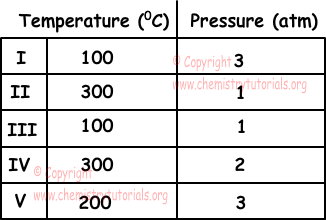 4. Which ones of the following statements are true related to average molecule speeds of H2 and N2 gases?

I. At same temperature, molecular speed is inversely proportional to square root of molar masses. Since molar mass of N2 is larger than H2, speed of N2 molecules are slower than speed of H2 molecules. I is true.

We know that there is a relation between atm and cm Hg;