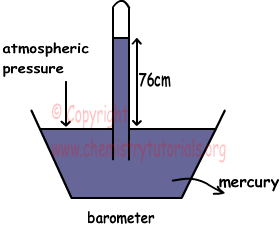 Let P0 is the atmospheric pressure then;

Where; r1 and r2 are diffusion rates of gas1 and gas2, V1 and V2 are average molecular velocities of gases and M1 and M2 are molecular masses of gases.

We can define Boyle’s Law ;

“Under constant temperature and number of particles, pressure and volume of gases are inversely proportional to each other.”

Under constant number of particles and pressure, volume of gas is directly proportional to absolute temperature. This statement is called “Charles’ law”.

Mixtures of gases can be found with following equation;