Where “n” is the number of half life,

Now we draw graph of mass vs. time of radioactive decay. 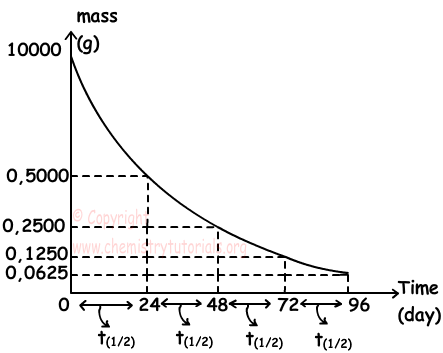 As you can see from the graph, mass decreases with time but never becomes zero.

Some properties of half life:

As you can see from the picture, there are 5 half life;

Example: Which ones of the following statements are true for half life of matters;

I. It changes with the change in mass of matter.

II. It changes with changes in the temperature.

III. It changes with the changes of types of matters.

As we mention before, half life of matter is only depends on types of matter. III is true.

Example: Graph given below shows radioactive decay of matter X. 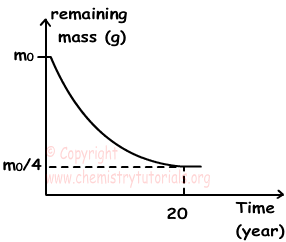 Use this graph and state whether the following statements are true or false;

II. Rate decay of matter after 20 years is smaller than initial rate decay.

Decrease in mass after second decay;

Thus, decrease in masses are not equal in first and second decay. III is false.