Periodic table is prepared for classify elements according to their similarities in chemical and physical properties. In this table, elements are ordered to increasing atomic number. General shape of periodic table is given below.

In periodic table, you can see atomic number, name, symbol and mass number of elements. As you can see from the picture given above, horizontal rows are called period and vertical columns are called group .There are 7 periods and two groups A and B in periodic table. Groups A and B are also have 8 sub groups (8B has three columns). In a period properties of elements change from left to right. In a group, elements have similar chemical properties.

p block: This blocks contains elements having valence electrons in p orbitals. IIIA, IVA, VA, VIA, VIIA and VIII A are p block groups. For example,

d block elements are also called transition elements and all of them are metal. 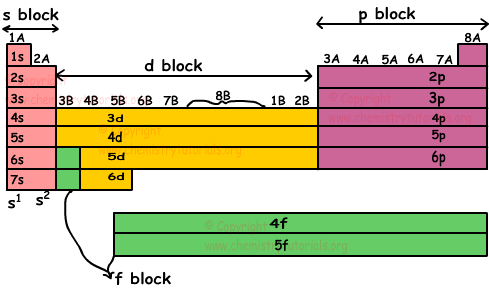 s and p blocks are called main groups . List given below shows some important group names;