We first find the locations of elements in periodic table.

Since atomic radius increase from right to left and top to bottom;

Increase in second to third ionization energy is greater than others, thus atom has 2 valence electrons.

Which one of the following statements related to chemical equations given above are false.

I. E1 is the first ionization energy of Na

First ionization energy is the energy required for removing one electron from neutral atom in gas state. I is true.

E3 is the sum of energies E1 and sublimation energy. Thus, E3>E1 II is true

Second ionization energy is the energy required for removing one electron from +1 charged ion in gas state.Thus, III is false.

Since II A and  V A has spherical symmetry property they have greater ionization energies then III A and VI A. Graph given below shows relation between ionization energy and atomic number. 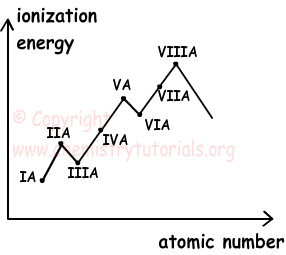 If an electron is added to neutral atom in gas state, energy is given off. We call this energy “electron affinity “.Following chemical equation shows this process.

Example: Which one of the following statement is true related to given elements in the periodic table below.

I. Metal property of X is larger than Y, Z and T.

II. Atomic radius of Z is larger than X, Y and T.

III. Ionization energy of T is larger than IE of X.

IV. The most electronegative element is Y.

Metal property increases from right to left and top to bottom. Thus Y is the most metallic element. I is false.

Atomic radii increases from right to left and top to bottom. Thus Y has greater atomic radii. II is false.

Electronegativity increases from left to right and bottom to top. Z is the most electronegative element.

Summary of periodic properties is given in the picture below.